Interview of Vera Winter presented in the exibition Yugoslavia: From the Beginning to the End 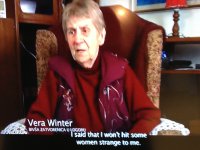 A video clip from the interview of Vera Winter, detained on Goli otok, from Documenta's collection is presented as a part of the exhibition Yugoslavia: From the Beginning to the End. The exibition was opened in December 2012 at the Museum of Yugoslav History, Belgrade.

The aim of the exhibition is to create a space that will introduce the visitors to one of the most interesting and most controversial state-building experiments in the 20th century, in a modern, attractive and objective way. The idea is not to show a time line of crucial events, but to cover all the important phenomena that left their mark on the countries and the societies in the land known, for more than 70 years as Yugoslavia. This exhibition is seen as a showcase for the research which is not over and is just one of the many stories about Yugoslavia and is another step towards a future permanent exhibition on the history of Yugoslavia. Within the following program of the exhibition Documenta participated in discussion forum  Memories on Life in Yugoslavia from 1919 until 1990: Collecting Personal Memories. The forum was held at February 12 2013, at The Museum of Yugoslav History, Belgrade. Maja Dubljević presented project Croatian Memories on War and Detention and in discussion with the audience explained main aims and findings based on the project.